The Russian people don’t make much of Christmas like Americans do. The big holiday for them is celebration of the New Year. The days are already getting longer and Spring can’t be far off…

Snegurochka, also known as the Snow Maiden or Snowy, is a unique character of Russian folklore and an essential part of Russian New Year’s celebrations. The origins of Snegurochka are contradictory. The roots of this feminine character can be found in Slavic pagan beliefs. According to legend, she is the daughter of Father Frost and the Snow Queen.

However, another Russian legend tells a story of an old man and woman who had always regretted that they did not have any children. In winter they made a girl out of snow. The snow maiden came alive and became the daughter they never had. They called her Snegurochka. But when the summer sun began to warm the land, the girl became very sad.

One day she went into the woods with a group of village girls to pick flowers. It began to get dark and the girls made a fire and began playfully jumping over the flames. Snegurochka also jumped, but suddenly she melted and turned into a white cloud.

In some parts of Russia people still follow the ancient tradition of drowning a straw figure in the river or burning it on the bonfire to dispel the winter. This custom symbolizes the transition from winter to spring.

Snegurochka became widely known in the 19th century after Russian playwright Aleksandr Ostrovsky wrote the play Spring Fairytale based on the legend. The play portrays the young beauty as the daughter of Frost and Spring. She is immortal and she lives in her father’s winter forest. Snegurochka is lonely and would happily give up her immortality for the ability to feel love, like normal humans.

Snegurochka’s mother Spring gives her a gift of a Love Wreath that makes her capable of loving. However, as soon as she falls in love she leaves her forest and melts at dawn as the sun touches her with its rays and turns her into a cloud. Nikolay Rimsky-Korsakov then wrote an opera Snegurochka based on Ostrovsky’s play.

The Soul of the New Year

The modern image of Snegurochka appeared at the turn of the 20th century, as she became a popular character in children’s New Year’s celebrations and theatrical performances. Little girls enjoyed being dressed up as Snegurochka by their mothers in light winter attire and sometimes a cap.

Snegurochka has always been an essential part of the New Year’s celebrations and a helper to Father Frost, the Russian Santa Claus. Young, beautiful and smiling, she always travels with Father Frost on a horse-drawn sledge to visit children and give them gifts; she acts as a mediator between Father Frost and the children.

Snegurochka is forever young and beautiful. According to the legend the old man and woman who made her from snow used two deep blue beads for eyes, made two dimples in her cheeks, and used a piece of red ribbon for her mouth. Snegurochka was very beautiful, but when she came to life, she was even better. Snegurochka is often depicted with snow white skin, deep sky-blue eyes, cherry lips and curly fair hair.

Originally Snegurochka wore only white garments and a crown, decorated with silver and pearls. Her present day costume is blue, red, white, or silver and her crown is sometimes replaced by an embroidered cap with fur edging. She is probably one of the most attractive female characters in Russian culture.

Where to Find Her

Snegurochka is said to live deep in the winter forest. Snegurochka’s modern place of residence is quite real — it’s the Russian city of Veliky Ustug (in the fairy tale, her origins are in the Russian city of Kostroma). Nowadays, Father Frost is considered to be her grandfather rather than her father, as in the old legend. 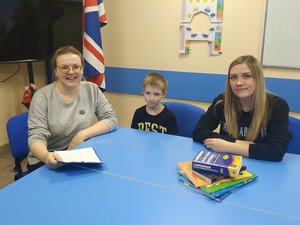 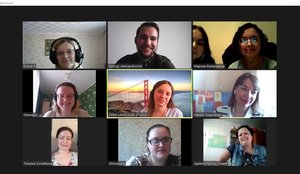 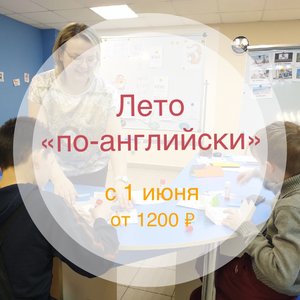